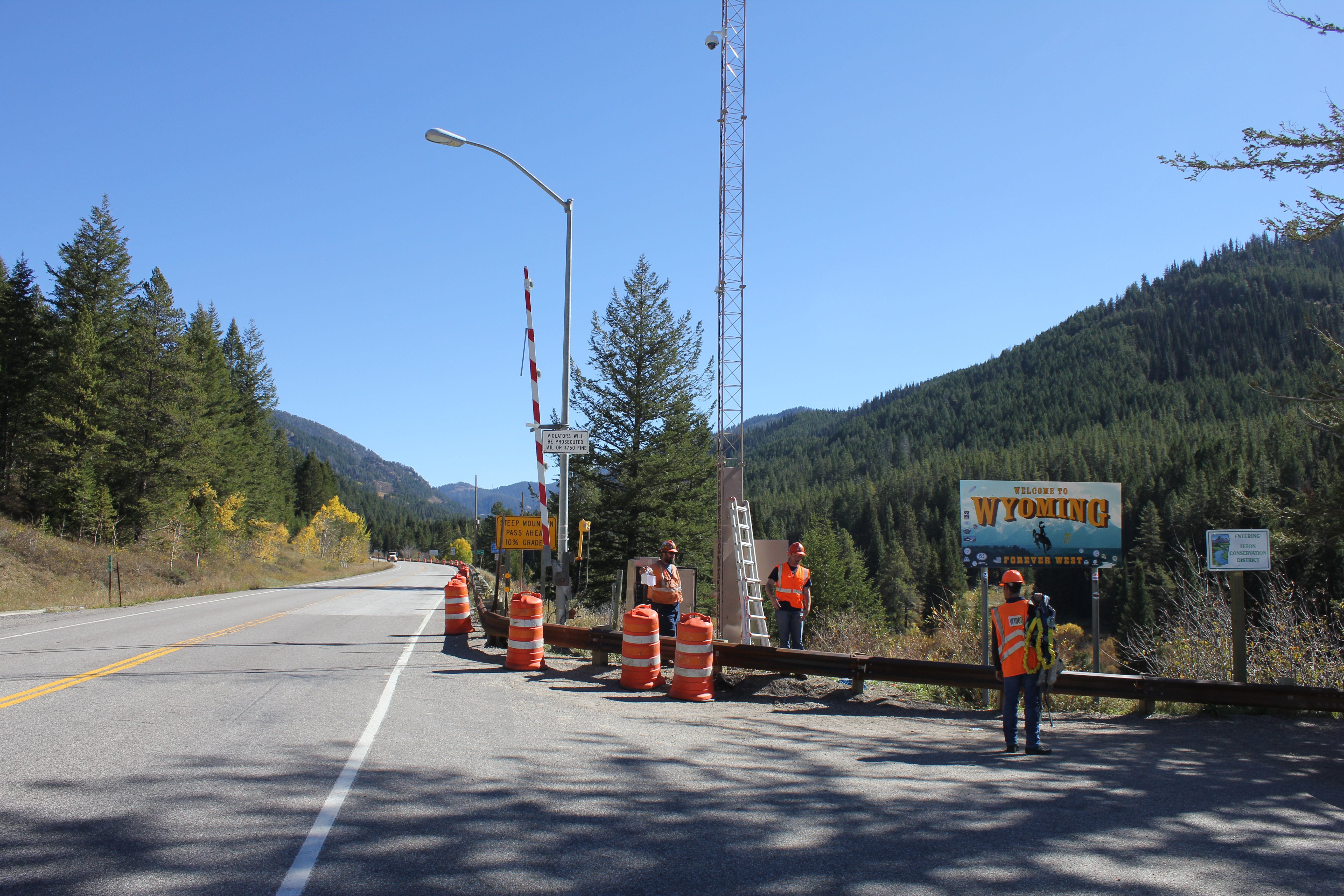 The Teton Pass in Western Wyoming is a critical transportation route. But with a climb to 8,431 feet (2,570 m) above sea level and long stretches of sustained 10% grade, it is a highway with special safety concerns. By restricting the types of vehicles allowed on the Pass, and monitoring the route using a Virtual Weigh Station, the Wyoming State Department of Transportation (WYDOT) and Wyoming Highway Patrol (WHP) prevent heavy vehicles from getting stuck and blocking the pass and reduce accidents from runaway trucks.

When you think of the Teton Pass, the first thing that comes to mind is probably the nearby Jackson Hole resort and the backcountry skiing and snowboarding accessible from the pass. The same features that make Teton Pass a mecca for thrill-seekers make it a dangerous route for heavy vehicles. Mountain passes are difficult to maintain in the winter when altitude and weather patterns combine to create an annual snowfall that averages 250 inches (635 cm). On Teton Pass, there are multiple avalanche slide paths that contribute to making it one of the most dangerous roads in Wyoming.

Towing a trailer on the Teton Pass in winter, with its grade steepness, grade length, and tight curves, presents a problem as the front of the vehicle (tractor or towing vehicle) can skid while the trailer maintains momentum, causing the truck and trailer to “Jackknife”.

Overweight commercial vehicles can get stuck going up the grade on the pass – the combination of the steep angle and ice prevents them from maintaining traction, and just like a jackknifed truck, they create a blockage causing other traffic to back up.

Even in perfect weather, a heavy truck descending a sustained, steep gradient will often experience overheating brakes – sometimes to the extent that the brakes fail. The vehicle then becomes a “runaway truck” unable to safely maneuver curves on the descent. The risk is so high on Teton Pass that WYDOT has invested in “catch net” vehicle arrestor systems to stop out-of-control trucks in case of an emergency. Watching a video of a truck using one of the runaway vehicle arrestors shows the incredible forces and potential for damage a heavy vehicle going downhill has.

Runaway trucks on the eastbound side of the pass have been a problem historically, with the majority of trucks involved in fatal accidents greatly exceeding the allowed weight limit.

Because of the danger and the history of accidents, WYDOT prohibits vehicles over 60,000 pounds from traveling on Teton Pass year-round. In the winter, the prohibition is extended to any vehicle towing a trailer. Signs located on both sides of the Idaho/Wyoming border (HWY 33/WYO 22) warn vehicles of weight and seasonal trailer restrictions. Fines are significant for violating weight restrictions, beginning at $435.

An IRD Virtual Weigh Station (VWS) system is used at the West approach to the Pass to monitor traffic for overweight vehicles. Installed in 2014, the system has been operating ever since, detecting overweight trucks and taking photos of violators. The overweight truck information and photo are sent wirelessly to notify the WHP that there is a truck violating the weight restrictions. 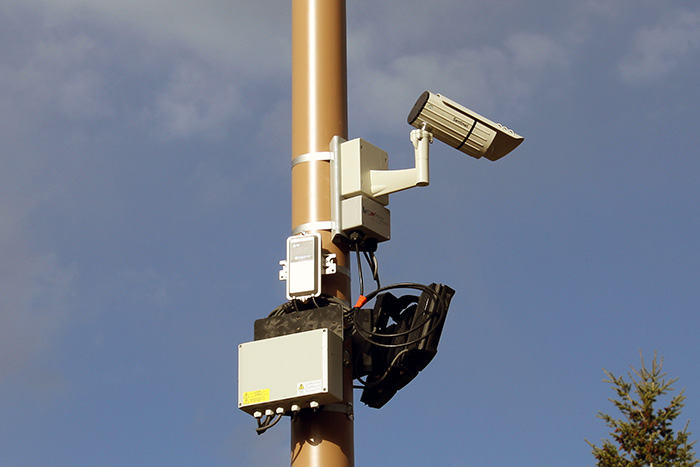 Troopers can usually track down and ticket violators, but with frequent infractions and a limited number of WHP staff, overweight vehicles can sometimes slip through. The always-on nature of the VWS could help with this in future. There is potential for Wyoming to adopt a Legislature-approved automated ticketing system. If implemented, this will allow WHP to automatically mail citations to violators identified by the VWS. Deterrence would be even more effective, as drivers become aware that overweight fines are unavoidable at any time, day or night. 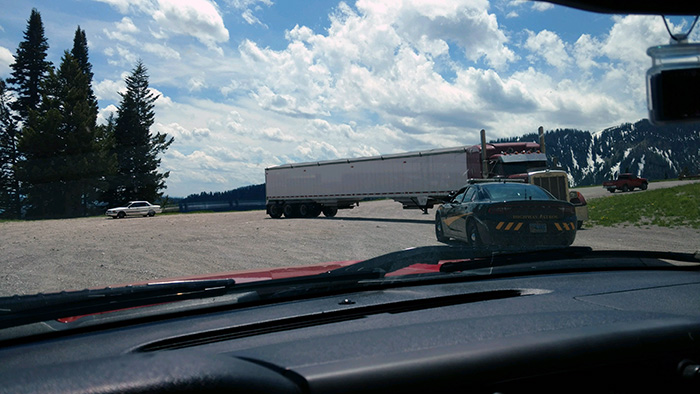 An overweight vehicle stopped by WHP

IRD’s WIM systems are not just used by transportation agencies for enforcement or data purposes. Over the years we have installed systems that alert drivers so they can take action themselves to operate in a safe manner. One of the very earliest WIM systems IRD installed was at the Eisenhower tunnel to warn vehicles starting a steep downgrade if their speed was excessive for the vehicle’s weight. The rollover warning systems we have installed in Georgia, Minnesota and other states let drivers know the maximum safe speed for their weight on curves. Our tire safety screening systems in the Netherlands warn drivers if their tires are underinflated and could be unsafe. Our bridge protection systems direct trucks to take another route if they are too heavy to safely cross the bridge.

Similarly, the Teton Pass system helps drivers avoid making a challenging stretch of road unsafe. When the WIM system detects a vehicle with a total weight that exceeds 60,000 pounds, it triggers flashing lights above a sign to alert violating drivers to turn around at the weigh station so they don’t get into trouble on the descent. 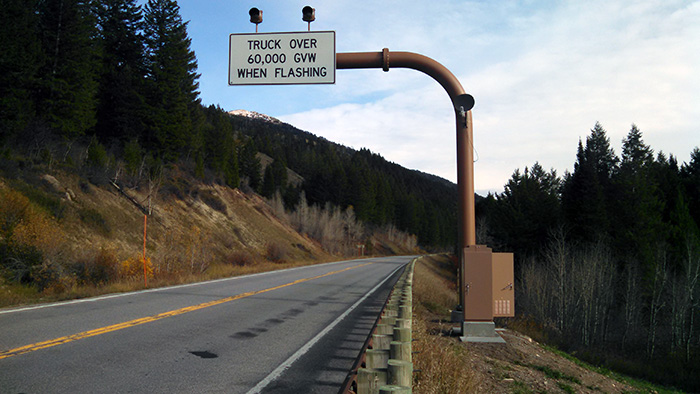 Overweight vehicles are given plenty of warning by flashing lights

Is it fair to subject trucks to surveillance that other vehicles don’t have to contend with? The answer is obvious – heavy trucks weigh much more than passenger vehicles and do not handle ice and snow as well as lighter vehicles equipped with all-wheel drive and traction control. Trucking is a fairly regulated industry and the primary mission of the Federal Motor Carrier Safety Administration (FMCSA) is not to penalize truckers, but to “reduce crashes, injuries and fatalities involving large trucks and buses.”

Heavy commercial trucks have one big safety advantage over other vehicles, and that is professional drivers. In just about every other way, big rigs pose safety challenges. Weight and momentum can make a runaway truck on a steep grade extremely dangerous at any time of year. Keeping overweight vehicles off the route is critically important as they are not only unsafe, but every time one has to make use of a vehicle arrestor, WYDOT incurs a cost to reset and replace consumable components of the system.

Knowing the risks involved, professional drivers carefully observe restrictions and consult a motor carriers’ atlas to avoid dangerous routes. Far from targeting responsible operators, an automated enforcement system linked to highway patrol serves to protect the public from the inexperienced, the unaware, or the criminally irresponsible.